Born in the province of Salerno, Battipaglia, the 3th January 1984. In the last years of university studies at the Politecnico di Torino, conveys their creativity and skills in the development of the folding bike, without rays which becomes a shoulder backpack and trolley.

On 17th March 2010 he earned a degree in Automotive Engineering at the Politecnico di Torino with a thesis on bike patent (vote 109/110).

In October 2010, the Order of Engineers of Turin awarded him with the first place for “IDEA-TO” as the “best innovative thesis of 2010.”

In November, the Minister of Youth, Giorgia Meloni, selects him among the “200 talents of Italy”(from 17 to 21 November 2010 in Roma link: http://www.youtube.com/watch?v=ZXNDvnG9Qok).

Extends the patent already filed in Europe and USA.

In the years from 2008 to 2010 worked strenuously with enthusiasm to the project, also involving experts and the study of professionals Techno Design.

In December of 2011 ends the construction of the prototype, made ​​of aluminum alloy with the support of company specializing in precision engineering Palmec snc. 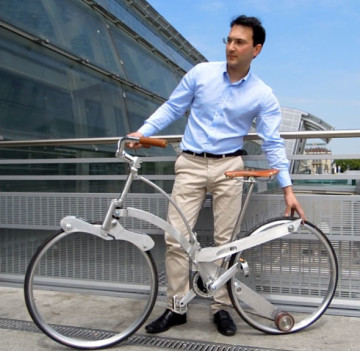 Elegantly Simple, Simply Innovative
We use cookies to ensure that we give you the best experience on our website. If you continue to use this site we will assume that you are happy with it.Ok